Immediately on the foot of photography’s invention in the 19th century, the camera’s eye was being harnessed to reveal what escaped the human field of vision in areas of study ranging from botany and astronomy – in 1880, a 51-minute exposure of the Orion Nebula produced the first photograph of a nebula[1] – to animal locomotion. Today, photography’s sphere of influence continues to grow. In fields as seemingly remote from photography as dentistry and dermatology, the image magnifying capabilities of macro lenses allied to increased affordability are supplying healthcare professionals with new spectrums of visual data. In yet another atypical context, macro-photography has been a boon to herping – the act of searching for amphibians or reptiles. This article explores the latter context in terms of how digital photography’s dismantling of a cost-barrier to participation in image production and the rise of image driven social media platforms such as Facebook and Instagram have contributed to a surge and unmatched horizontality in knowledge production around frog species located in India’s Western Ghats. 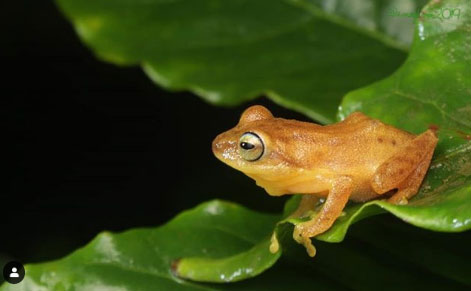 While enthusiasts and professional photographers have been practicing macro photography since the early 20th century, over the course of approximately the last half-decade, online tutorials and transfer of lower manufacturing costs to the consumer have opened the practice up to ever greater numbers. Over one weekend last year (2019), on a visit to Hingaara, a herpers paradise and ‘nature stay’ a few kilometres from Agumbé, in Karnataka’s Shimoga district, its resident naturalist Girish Gowde explained the macro-uptake. ‘There are a lot of techniques you can use as well as cheap equipment that you can add onto your main equipment to get more detailed shots, people are finding it easy with the technology and software implements, so they do it.’ On Instagram, the majority of the 17.4 million posts tagged with #macro are frogs, insects and plants. Nature photography similarly dominates the 9.4 million images making up a feed tagged #macrophotography, while #macro_brilliance follows a similar pattern. 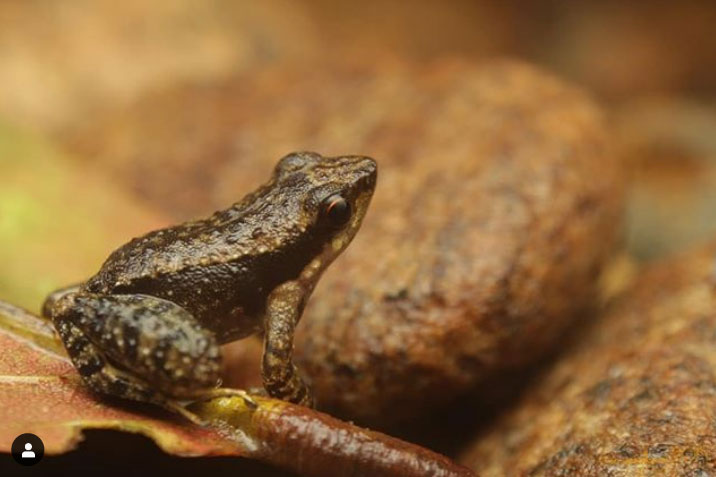 It is not only greater concentration of macro-photographers in the ‘amateur’ space, but a wider affordability of camera equipment, including of course mobile camera technologies, which have accelerated documentation of the habitat distribution and lifecycles of frog species. Cheaper and better-encased camera equipment means that frogs are being shot in the crucial monsoon season; previously, photographers would wait for drier conditions to avoid damaging their photography kits – missing the optimum window for observing frog density and behavior. In an interview I conducted with KV Gururaja, one of India’s most renowned herpetologists – and who jokes that his name finds its way to nearly every online or offline amphibian related forum, including frogs of Panama – he pointed out that ‘with the sophistication now anyone can come and work in rainy season, so apart from those dry periods, you have activity for your camera during the wettest months.’[2] The implications for scientific study and conservation cannot be underestimated. Gururaja realized early in his career that the study of frogs demanded a collective approach, a scenario compounded by the colossal scale of India and relative scarcity of herpetologists. ‘This I realized soon in my PhD because the kind of depth the subject requires, I felt it was not possible for one person to do,’ he said.

Collective action ended up coming from unexpected quarters. The popularity of posting the spoils of herping on Facebook and Instagram, and users’ propensities for tagging these images with location among other meta-data, has provided a resource for identifying and monitoring new and existing frog species. The advantage of user generated content lies not only in its breadth but also in the principle of ‘sharing’ fostered through the culture and very architecture of social media. Professional photographers on the other hand have commercial reasons to be territorial about the metadata that lends a good picture its scientific value to people studying them. Gururaja explained their reluctance to me in terms that illuminated their need to protect a patch on which their living might transitorily depend: ‘if the photograph of a particular species is taken at Hingaara they won’t post it as Hingaara, they will say I have taken it at Agumbé. They don’t want other photographers to go, it’s a kind of competitiveness or insecure feeling.’ 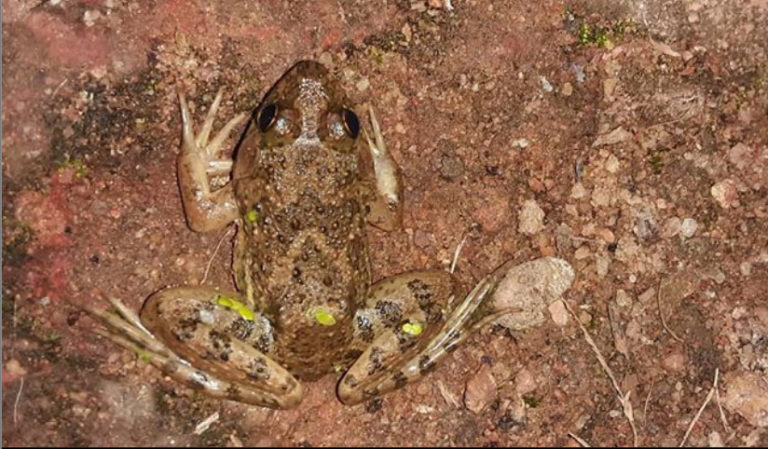 Networked digital technologies are facilitating interactions and exchanges, which were previously nonexistent, between scientists, ‘citizen scientists,’ as well as people with looser affiliations to conservation and local populations in biodiverse regions such as the Western Ghats. On Facebook, Gururaja responds to requests for frog ‘ids’[3] from photographers ranging from high school students to the sixty-somethings. Much of the activity on Facebook groups, such as ‘Frogs of Karnataka’ and ‘Western Ghats Forum,’ is instigated by members posting frog images with requests for their identification directed at the community. With aggregation of even some of this visual data, for example India Biodiversity Portal is linked to a number of Facebook groups, possibilities for closing significant gaps in the herpetological record arise. Gururaja is keen to point out the benefits for science and conservation accruing from social media activity: ‘The plus point of Facebook or Instagram postings are that among 450 odd species in India for which we have IUCN status, we know for only about 50% (220 species). We cannot say it’s endangered or vulnerable unless we have data, and that comes from Facebook and Instagram posts.’

In some of his recent research, Gururaja’s has designed a methodology using frog photos crowdsourced on social media. In Mapping the Malabar Tree Toad, he placed a call on India Biodiversity Portal for members to ‘upload any/all of the following – pictures, calls, natural history, road kill and so on about Malabar Tree Toad,’ and provided links to a couple of apps on Google Playstore designed for contributors to add media. Gururaja’s remark on the posting that ‘Each of your observations help in understanding MTT’s distribution and habitat requirement. Eventually the activity will help in conservation of the species as well as its habitat’[4] reiterates social media’s power to broker exchange and conversation between the scientist and citizen scientist. Prior to Mapping Malabar Tree Toad, the scientific community believed the species, which is offically named Pedostibes tuberculosus, to be endangered – in 2004, it was accorded this status on the basis of IUCN’s red list[5] criteria. Until Gururaja’s online call for frog enthusiast to participate in tracking its habitat, the Tree Toad was known to have frequented only 8 localities. The upshot of extending fieldwork across digital space can be found in the number of localities associated with the species, which jumped to 50, and Gururaja’s conclusion not only that the species was not as rare as was earlier believed but that ‘these kinds of insights are coming with Instagram.’ These internet enabled discoveries paved the way for the delisting of the species from endangered to vulnerable, a notable achievement in amphibian conservation.

It is not only scientists who benefit from the information sharing capacities of social media. Girish, of Hingaara, has no formal training in the occupation he now performs. Instead he’s acquired expertise, which make him one of Hingaara’s main draws, through learning both in the field and online. ‘Mine is more of online discussion with people, so I’m part of lots of Whatsapp groups, lots of Facebook groups. I keep sharing photographs. I keep seeing photographs from other people. Facebook in that sense is very useful, whatever I’ve learned, I’ve learned from Facebook’. Through being on social media, he has participated in and observed discussions, and the sharing of images and requests for ‘ids’ that have widened his knowledge of mainly amphibians, reptiles and insects. Oftentimes, through Whatsapp groups, he interacts with university-affiliated professors and researchers, whose engagement with ‘citizen scientists’ such as Girish is purposefully directed at popularizing environmental stewardship. 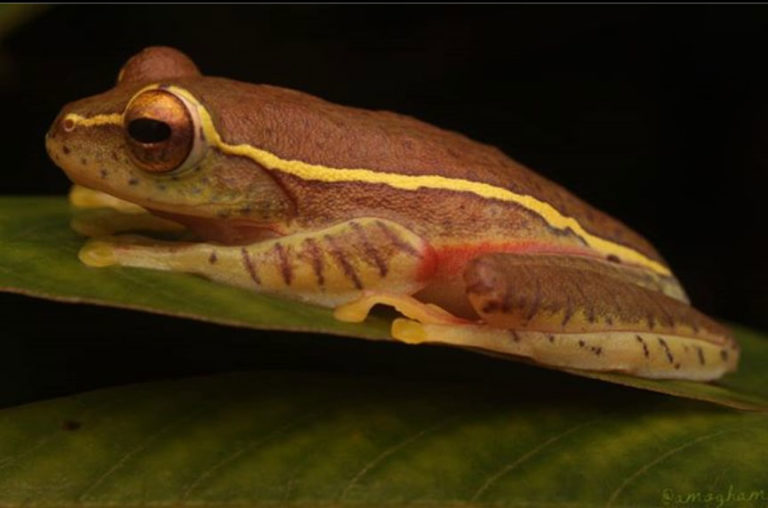 Phone and camera technologies have been central to blurring lines between scientist and citizen scientist. In 2015, CR Naik, then a security guard at Dandeli Anshi Tiger Reserve (DATR), played a forest recording to Gururaja that he had taken on his earlier-generation Nokia. No sooner had Gururaja identified the sound as belonging to a White Throated Kingfisher than Naik corrected him, ‘No no no, it’s not Kingfisher it’s a frog.’ Disbelieving at first, Gururaja requested Naik to video the frog making the bird-sounding sound. When Naik returned to Gururaja and his team with a video made on an Olympus camera, they collectively confirmed the discovery of a new frog species. Gururaja has written in Frog Log,[6] a magazine published by the Amphibian Survival Alliance, about the importance of including Naik in the discovery and making him a co-author in the subsequent journal publication. Speaking with me, he added, ‘It is no more a scientist thing to say I have discovered a frog. This is what I was able to do and it was all because of the technology.’

Back at Hingaara, Facebook and Instagram posts of flora and fauna shot in the area remain important agents at inducting the local population into environmental awareness and conservation. According to Girish, the nature-stay’s proprietor Shashank Hegde ‘didn’t know what was in his backyard until photographers came in and took photos.’ Currently, this bounty in his back garden is what draws the photography tours to his property and buttresses the USP of Hingaara’s digital marketing message. Satish, who chaperones Hingaara guests to local viewing spots, makes tea and generally arranges whatever else contributes to a guest’s comfortable stay, can, Girish says, ‘name all the bush frogs, and id all the snakes in English.’ In the few short years since Shashank has returned to his native place to run Hingaara, he has witnessed a sea change in attitudes among the local population, who no longer view smaller species as pests. In a Whatsapp conversation with me, Shahshank reflected on how, ‘After consistently seeing photographers and photographs, peoples’ interest in these species, this slowly started building curiosity within them. Eventually, they stopped killing them, now whatever they see either they click an image through their mobile phone or let us know.’ Perhaps more astounding than photography’s ability to show us hidden sights in the night sky is its ability to change how we see what is in front of us in our own back gardens. 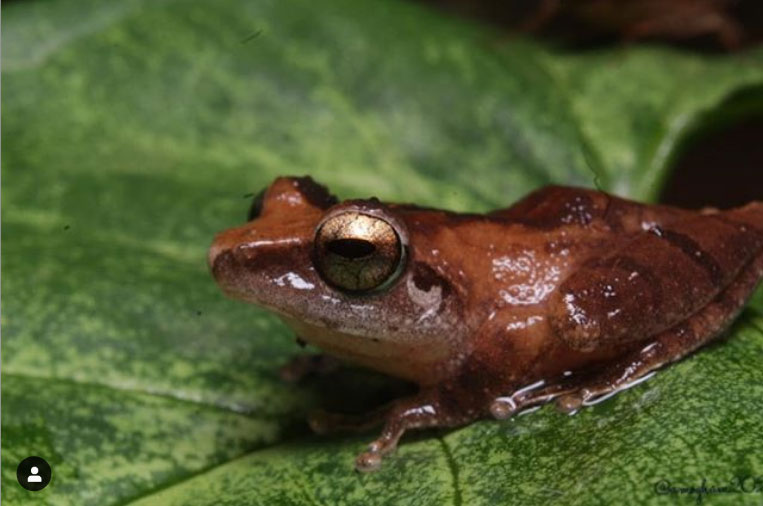