Shilpa Gupta’s book is a collection of critical commentaries, reflections and images of a new series of work which echoes her questions and concerns about borders – geographical and otherwise

Drawing in the Dark is a compendium of your recent work. Why is a book important to an artist? And how is a book different from a physical or virtual exhibition of your work?

The book is many things and allows for different kinds of encounters. It could be the very first encounter for audiences who have not seen the works before, or a second encounter, to pause and look at some details which may have been missed out in a physical show – as people’s walking pace in exhibitions has only increased. 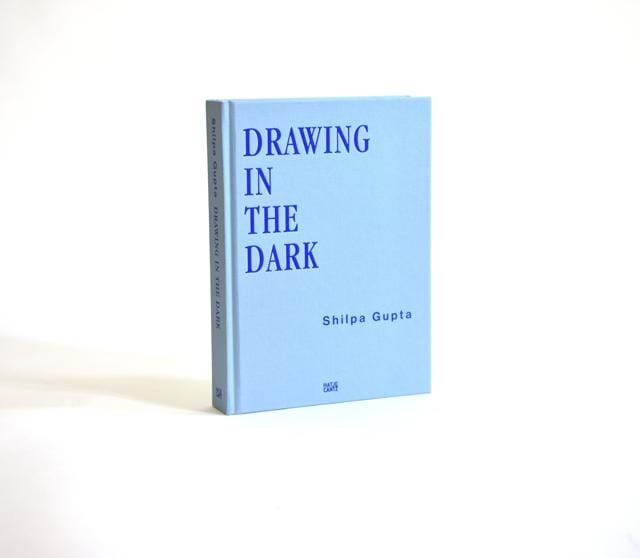 This book includes four bodies of works developed around Bengal Borderlands which were shown at different venues across several years. It can also be just a filler, in case you have seen one set of works and not the others. So it becomes an encounter with a practice from a particular period. Besides, it also includes some earlier works so links can be formed with the longer journey.

A book presents an opportunity to have in-depth texts on the works - here by Sunil Khilnani, Anushka Rajendran and Thomas Theil and I am so grateful for their very considered reflections.

So it seems that a book can offer more than a single show – still it can’t quite substitute the spatial experience of an exhibition where the scale, materiality and juxtaposing of objects all converge together in creating a sensation and meaning. The book, then, creates an afterlife for artworks and like all memories, it can’t replace the event, and modifies and retains some parts while recalling it via stories. 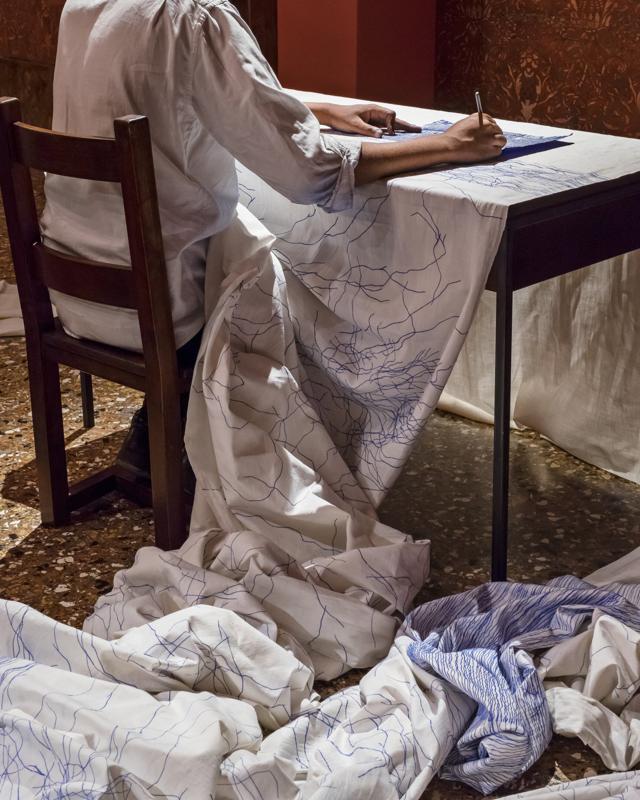 Performance based installation by Shilpa Gupta (Courtesy the artist)

Borders have been a perennial focus in your work. Could you tell us a little more about how and when you started to think about them?

I am interested in the relationship any being has to the space outside itself. Growing up as a woman in South Asia, it is impossible to not think about lines which are constantly being drawn around you and the numerous predefined pathways that are nearly pre-navigated for you. In fact, several of my early works looked at notions of the body and even art itself. I went to art school in the year 1992. It was a moment of great enthusiasm, taking a train from the suburbs of Mumbai to the city centre. However, often one would take the train back as the art school was shut. It was a year when the city was gripped by fear post the sectarian riots after the Babri Masjid demolition.

It was horrifying and heart breaking to see the cosmopolitan dream start to fade. A little after that one started hearing more and more about “vegetarian” housing complexes. We are surrounded by countless borders, those drawn on paper and otherwise. With Aar Paar, a cross border public art project which I co-initiated between India and Pakistan, my time in Srinagar, to Bengal Borderlands and now the recent body of work which looks at attempts to restrain free speech, I am interested in the relationship between an individual and surrounding structures. So borders can be beyond the definition of the nation state. Another work, Someone Else, looks at 100 stories of authors who wrote under fake names to escape prejudice and expectations.

In the artist notes in the book, you cite scholars like Malini Sur whose work you have consulted for your research. I am interested to know how you research? Is it only textual or is it also visual?

I read a lot of different kinds of material as I am curious to learn about different perspectives. The reading ranges from blogs to those published in newspapers, documents authored by the government and short independent texts to more in depth material in a book by independent researchers. This then, would all be “textual” research, as you term it, most of which, takes place in anticipation of the actual journey. However, there is little that can prepare you for the ‘experience’ of being in the borderlands. I would call it then experiential research rather than visual research – especially in the border areas, where you are traversing on edges of a structure and invisibility often becomes a pre-condition. Here things are spoken in interviews, sometimes with absurd over emphasis, and then there are things which stay unspoken, or those that are spoken only off the record.

Of course as a multimedia artist you take photos and make recordings. But that is hardly the starting point for me. Sometimes, a candid conversation over tea at a check naka, or a car journey where for hours on end, the brightest light in the sky is that of the glaring flood lights on the border fence can trigger a work. But then it could be listening to an audio recording once back in the studio, while looking at scribbles in my note book or in the margin of a book which can also lead to a work. I do tend to return to some texts, paying attention to the highlighted portions and even just articulate my experience. While the readings are very helpful, in only rather few instances, they enter directly into my works. Most of the work emerges from the memories of the rather complicated experience, the recordings be it audio and finally the photographs.

I also want to understand how you read. As a visual artist, what stands out to you while reading or what are you looking for in a text? Do visual artists read differently you think?

What comes to my mind is that as a visual artist one is perhaps more attuned into the “act of looking”, “construction”, in the act of framing and therefore occurs the interest in agency, doubt and deception. But I know that for many other artists this is not the concern so this might not be the right answer. Also from rather early on, from say, even 1995-96, having being interested in taking art to wider audiences one had to engage with “infrastructure”, its limits and new possibilities. 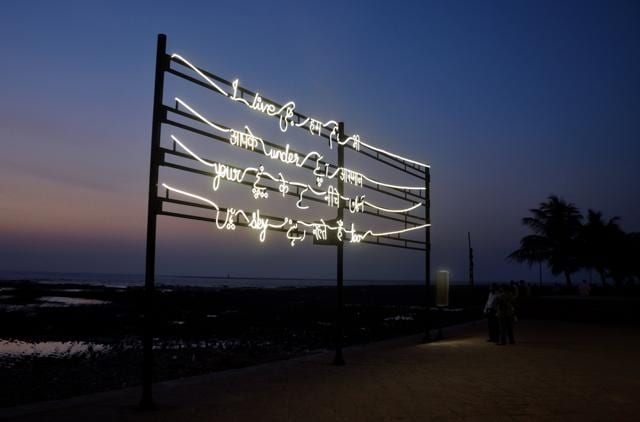 Your text installations are exhibited in public space. They are interactive and immediately draw the attention of the viewer. What are the challenges as well as advantages of working in a public space and how do you negotiate the tightrope between the privacy of creation and its public display?

Showing in any public space comes with its own challenges. For example, when I showed I Live Under Your Sky too, in my neighbourhood, it took two years of chasing for funding. Once the funding was promised and we were about to start work, it was cancelled last minute. Then comes the permissions from different authorities and chasing around for them takes more time than the making of the actual artwork. There are then other smaller interventions, when I pasted small size photographs in the Kala Ghoda area in my city. This was in 1997 and I didn’t need permission for that! Same with Aar Paar which ran for six years. In one iteration, it involved pasting of 10,000 posters on the streets, which led to more than one warning from uniformed men due to the content of the work. When I have done Video Art Road show, I have been asked why the video art works I was showing were not entertaining. Showing outdoors can be risky and once in a while frustrating too, but the heart-warming responses make it all worth it!

Do you write the texts that are used in your installations and what do you read for pleasure?

While the texts from my light installations are written by me, in three bodies of works on the Bengal Borderlands, there are extracts from interviews and government documents and in a couple of instances, a fragment from external material via a book or even an online blog! In the 24:00:01 flap board work, while most of the text is by me, the count of flags and symbols of recognised and unrecognised countries comes from literally making a count.

I am a big fan of fiction. My favourites are Anita Agnihotri, Saadat Hasan Manto and Premchand. In terms of books that have made a deep impression, I can now think of In an Antique Land by Amitav Ghosh, Things Fall Apart by Chinua Achebe, The Master and Margarita by Mikhail Bulgakov, Em and the Big Hoom by Jerry Pinto and Midnight’s Children by Salman Rushdie. But as you know this list is never complete.