Artist Sanjay Yamgar breaks down the mental blocks about art at his studio in Wai, which is open to all

The ascent to Panchgani and Mahabaleshwar also begins at Wai, a popular temple town near Pune. In recent years, several Bollywood films such as Swades, Singham, Omkara, Chennai Express amongst many others have been shot in the villages and secluded temple precincts of Wai thus increasing tourist interest in exploring its many quaint villages, wadas, large swathes of green around the Dhom Dam and the antiquity evoked by its gorgeous temple architecture.

When I was there, word had got around the town that Dabangg 3 was being filmed in Wai and it was no strange sight to see Salman Khan fans asking around about the location of the film shoot. Popular cinema and its interaction with small towns throws up many interesting stories. I made some of these discoveries while walking around with Wai-based artist and local lad, Sanjay Yamgar.

In 2015, Yamgar, 44, relocated to Wai after packing up his art practice in Mumbai. He built a 10,000 square feet art studio in Shendurjane village. Yamgar Art Studio comprises various sections — painting, carpentry, metal and clay work, pottery and sculpture. Yamgar feels relocating to his native Wai from the overcrowded metropolis of Mumbai is one of the best decisions of his life.

Pune is not too far away and he makes day trips for work commitments when required. He informs, “I don’t miss the city at all. In fact, city to village migration has peaked. I eat fresh vegetables, go biking, work without too many distractions here.” His formative experiences impressed upon him that art cannot be perceived in watertight categories.

“Art cannot be thought of in isolated categories. My practice seeks interconnections and linkages between various forms and media of expression. While setting up the studio in Wai, I had a primary goal — any visitor should be able to appreciate and understand art making beyond the confines of painting and sculpture.”

While it may all sound very idyllic, Yamgar’s journey hasn’t been easy. Born in Atpadi in Sangli district, Sanjay Yamgar moved to Wai at the age of eight. His father was employed as an art teacher in the Maharshi Shinde High School in Wai. Yamgar also studied in the same school and has fond memories of watching his father paint murals and portraits of renowned people on the walls of the school.

Narayan Yamgar, Sanjay’s father, was also an avid photographer and perhaps, the only one with a camera in their village. He would regularly accompany his father on weekend photography trips around the village where Narayan Yamgar was often requested to photograph corpses as the last memory of a dear departed that the family wanted to safe keep for emotional reasons. 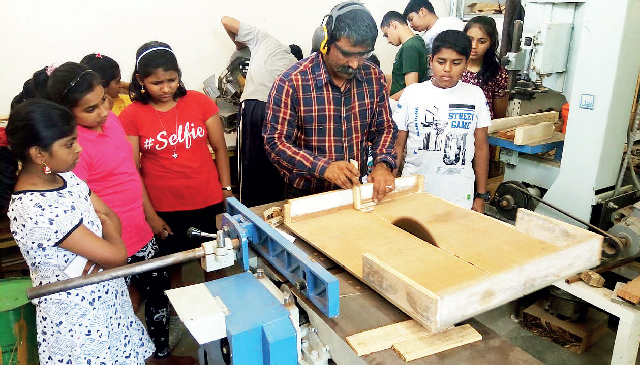 The corpse would be made to sit on a chair, Sanjay would hold it from behind and avoid appearing in the frame while the father finished his job. It was difficult to sustain the family on a teacher’s salary and to make ends meet, Sanjay’s parents did tailoring jobs at home. He explains, “My mother never threw away anything. She turned everything into a utility item because we had so little to make do with. I tried to incorporate that into my art practice. It became a way of life.”

Yamgar’s Garbography (2015) was a photo project themed around garbage dump yards in Mumbai. Until date, he uses a lot of scrap wood in his woodwork and sculptures. Yamgar recounts that while growing up in Wai, there was absolutely no awareness about art education. Drawing in school was considered a hobby class. Only those with relatives in cities knew about art colleges in Mumbai or Pune.

Yamgar remembers parents complaining to his father if they found their children drawing beyond school hours. What a waste of time they thought! Things haven’t changed much though Yamgar is hopeful that every small step counts. Ever since he set up his studio in Wai, he has been able to attract some local youth.

While setting up the studio in Wai, I had a primary goal — any visitor should be able to appreciate and understand art making beyond the confines of painting and sculpture - Sanjay Yamgar, 44

Two of them now study at Abhinav Kala Mahavidyalaya in Pune, which is also Yamgar’s alma mater. They worked with Yamgar for a year before seeking admission in art college. There are many such stories of youth from the area and vicinity regularly turning up at his studio, working for a year under him and then seeking art education at an institution of their choice.

Yamgar has financially supported many young aspirants by offering a monthly stipend and also paying their college fees. Besides, he started holding art appreciation camps for children and conducts a weekly art class in a local school to create awareness about the various prospects of art education. Invitations to conduct similar activities in other institutions in the area came his way.
He soon realised that he has to loop in the parents in these conversations. Now many families spend weekends at his studio and participate in art activities. Yamgar adds, “I also talk about making a living as an artist. I encourage them to visit my studio. A visit often goes a long way. They will perhaps understand that it’s possible to be an artist and lead a decent life. I am fighting to change a mindset.” May there be more like him!

The writer suffers from wanderlust and teaches literary and cultural studies at FLAME University, Pune