A window to the wide world 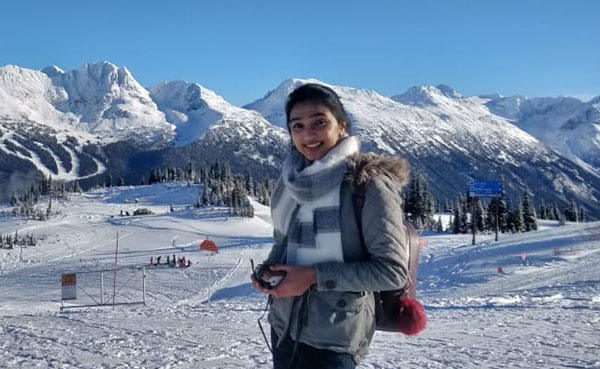 I remember sitting in the airplane and wondering if I had made the right decision. As I passed through skies that changed its colours, my mind reflected on thoughts of its own. It was my last year in college, would I be missing out on a semester worth of memories? Would I have to start from scratch my different activities and routines I had established over the last two years? Would this experience be academically enriching enough to forego the courses FLAME offered me otherwise? However, as I passed by the snow-clad peaks close to Vancouver, I knew this would be an experience I would hold close to my heart.

Over the fall semester of 2019, I was an exchange student at Quest University, Squamish BC. The undergraduate program offered at Quest is unique as it has every student work through a question they formulate, as opposed to a conventional major. This allowed students to engage in highly inter-disciplinary system of learning. I was taken aback by the spectrum of questions the students they had opted for. There were students who had questions that allowed them to study courses on anthropology along that of music, comics and environmental sustainability, psychology and education and so on. Moreover, the program was provided in a block format. Every course was a block of 3.5 weeks and everyone just took one course at a time. This allowed in-depth engagement with the subject material.

As a Literary and Cultural Studies major, I broadly took courses that focused on culture studies. The small classroom size filled with extremely bright minds were very conducive to learning. Similar to FLAME, class discussions played a significant role in learning. The diversity present in the classroom only added to the multiplicity of thought and experience that were on offer in Quest. The faculty brought to the table their collective experience from a range of disciplines. I sat in classes where the professor recounted her journey in remote villages of Panama as she studied shaman practices as an ethnographer; a professor who narrated with immense passion how dance had helped nuance her academic interest in gender studies; a professor who engulfed in the wonderful literary world of Marquez through A Hundred Years Of Solitude.

Apart from the academic experience, there was something about living surrounded by hills in a town as serene as Squamish. There were days I woke up to a rare ray of sunlight caressing my cheek as the sun rose over those majestic peaks. There were moments I just snuggled with a book in the cafeteria while sipping on coffee Nadine, the super warm and gem of a person who worked in the cafeteria, brewed for us. There were instances I caught myself looking at the close group of friends I had made with the other exchange students who were from Sweden, Amsterdam, United Kingdom and Germany. There were times just spent exchanging stories over cups of hot chocolate during community events. Those four months also stood witness to several of my firsts such as my first snowfall, and first trek up the Squamish Stawamus Chief.

I returned back to FLAME having seen a little bit more of the world and learning what it had to teach me through its environment, culture and practices. There is more to this experience that I may not ever be able to put in words but will always hold close. On my plane ride back, I had just one thought in mind. This experience was so worth it.
ADMISSION ENQUIRY
DOWNLOAD BROCHURE
VISIT US
APPLY NOW
CONTACT US
CAMPUS LIFE