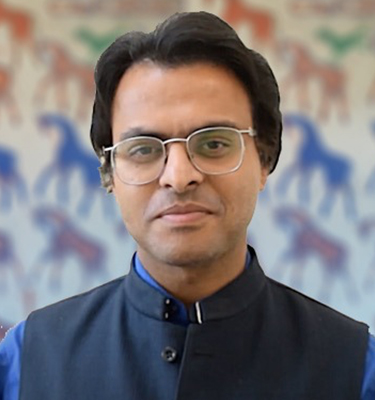 Yugank is Associate Professor – Public Policy at FLAME University. In 2009, he joined O.P. Jindal Global University (JGU) as one of its founding faculty member, steering a range of institution building efforts, in particular its research infrastructure and international collaborations. Prior to JGU, he worked with a major private bank, consulting its rural infrastructure projects in eastern India.

He pursued his Master’s and Ph.D. in law and economics, both as Erasmus Mundus Fellow from Europe. His doctoral thesis was titled, Essays in Informal Institutions. After his doctorate, he re-joined JGU, helping build its School of Liberal Arts & Humanities.

Yugank publishes in reputed journals, and also contributes to national dailies and other popular fora. His research interests include regulation, law and development, institutional economics, knowledge structure and psephology. He enjoys teaching interdisciplinary subjects, including institutions, futures studies and ethics. He is a visiting faculty in several institutions including IIMA and IIMK.

He sits on the board of the Indian School of Public Policy, which he helped establish. He routinely engages with the government on public policy issues. Yugank is however, most passionate about small towns and education in India. Recently, he cofounded a philanthropic, crowdfunded school in rural, western UP.

Dear government, can we have some real liberalization, Deccan Herald, July 2018

The Algebra of UP Assembly Elections, Live Mint, March, 2017.

The Ivy League’s dark history shows it is not easy to reject charity that involves dirty money. Quartz, February 2017.

The air we breathe: if not now, then when? Live Mint, November 2016

For Pleasure or For Profit: The Promises and Perils of Art Markets, the Caravan, August 2015.