India is the world’s largest democracy with a steadily growing economy. In the last concluded general elections, more than 600 million voters exercised their democratic rights by casting their votes to choose the next government. The basic expectation of a citizen from any democracy is to have a continuously improving standard of living. Ideally, economic growth is one of the measures of standard of living of a country. Often, the Gross Domestic Product (GDP)- per capita is used as an indicator of living standards.

Now, the question is whether democracy is a pre-condition in economic growth? Although democracy creates better opportunities for economic growth and cultural progress than an authoritarian regime, however, there has been a long-standing debate on the relationship between the forms of government and the economic performance of a country. According to some political and economic thinkers, democracy may not be suitable for economic growth. Certain popular perception also supports this idea. Even Plato denigrated democracy as the second-worst form of government after tyranny. Robert Barro, an eminent growth economist, argued that more political rights do not necessarily have any effect on economic growth.

A prime example is China, a country achieving significant economic growth without democracy. The eclipse of the Arab Spring and the recent rise of the populist politics in Europe and the United States may accentuate this view that democratic institutions do not contribute much for economic growth. Some argue that while democracy may not be a necessary condition to unlocking economic growth, it would not be prudent to conclude that an autocratic or dictatorial regime would, in reality, hold the key to economic prosperity. In other words, the form of government may have little bearing on the standard of living which largely depend on economic condition of the country. However, a recent study by Daron Acemoglu from MIT, Suresh Naidu from Columbia, Pascual Restrepo from Boston and James A. Robinson from Chicago University found strong evidence that democracy does have a significant and robust positive effect on economic growth.

So where does India stands in terms of democracy? According to the Global Democracy Index of the Economist Intelligence Unit (EIU), which measures the state of democracy in 167 countries using 60 indicators across five broad categories, India ranked 41st in 2018 with a score of 7.23/10, a marginal improvement from a rank of 42nd in 2017. The five broad categories considered for the index to measure democracy are electoral process and pluralism, the functioning of government, political participation, democratic and political culture, civil liberties, etc.

Flawed democracy is the categorization of countries where elections are free and fair, civil liberties are honored, but the country may face with the curtailment of freedoms of speech and media. Furthermore, these nations may have significant flaws in other democratic aspects, such as poor political culture, low level of people’s participation in politics, and issues with the functioning of the governance.

According to the 2018 Index, India scores 9.17 in electoral process and pluralism, 6.79 in the functioning of the government, 7.22 in political participation, 5.63 in political culture, and 7.35 in civil liberties out of a total score of 10 points in each of the critical parameters.

Given such a rank in the democratic index, the natural question is what democracy means in terms of economic growth of the country, and how are they linked with each other? Since the inception of this index in 2008, a close association between the level of democracy and economic growth in India (Chart 1) can be observed. 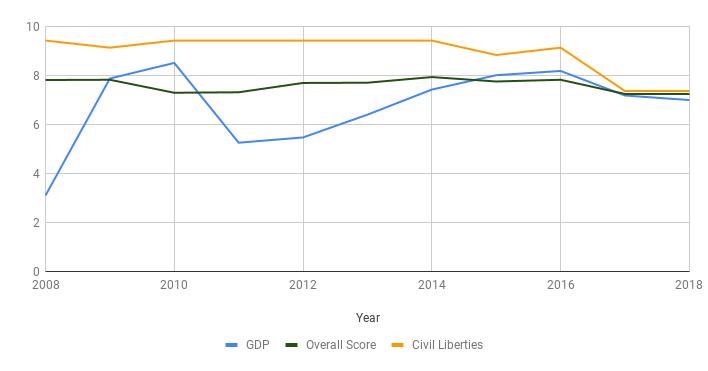 Notably, an increase in the value of the democracy index has nearly led to a subsequent rise in the economic output (a measure of economic growth). Although this does not say anything about the causality between democracy and growth, indications are that strengthening the democratic values acts well for an economy’s health.

India stands well in terms of electoral process and pluralism but lags behind in other components.

According to some studies, civil liberty is an integral component of democracy as well as economic growth. Sadly, in recent years, the democracy index has declined consistently. Civil liberty is referred to as the state of being subject only to laws established for the betterment of a community, mainly based on the freedom of action and speech.

India had a score of 9.41 out of 10 in 2008 as well as in 2014, but it has declined to 7.35 in 2018. Recent political events in the country do not provide any indication that civil liberty will improve any soon. We need to ask ourselves that we might be living in a country which is being governed by the representatives elected through a democratic process but are we nurturing the institutions which are the pillars of democracy? A house may look beautiful from outside, but if the pillars are not strong, it can crumble. Thus the pillars need to be strengthed by the people for which the democracy is meant. Democracy needs to be protected and strengthened by the people of this country. Our job does not just end with electing a “strong” government, and we must make sure the core values of democracy are also strengthened. This is for our own benefit. Democracies along with the promotion of civil liberty also help in initiating economic reforms, increasing private investment, improving governance, and a reduction in social conflict.

India desperately needs to grow and grow faster so that the vast majority of the population enjoys the quality of life that they deserve. Strengthening our democratic institutions is thus a necessary condition for harnessing the full potential of its people and its economy. To bring in civil liberty and thus promote democratic values, one can hope that current socio-political discourse in the country will be inclusive, tolerant and will uphold the true spirit of India, which is “unity in diversity.” India benefits when all of us benefit, it includes ALL.

From corporate roles to an educationist with a twist towards nature

Rohan Wekhande On Pursuit Of Creativity And Secret To Entrepreneurial Success

Saumya Mehta's love for Psychology and Sports came together at FLAME and led to his Ph.D. at German Sport University Koln and Vrije Universiteit Amsterdam

CEO At 22, Eatabl's Co-Founder and FLAME alumnus Advait Makhija talks about his industry-disrupting startup and plans for the future

The Curious Case of ‘One Nation, One Ration Card’ (ONORC)

FLAME alumna Tirtha Patel heads to Columbia University, confident in her academic and research background to take on the global stage