With the ongoing Coronavirus pandemic, the general interest in knowing more about viruses has increased manifold. Being from a life science background, I find it extremely interesting and important that many people are eager to know about viruses. These invisible entities have caused havoc and brought the entire world to a standstill. No one could have imagined few months back that somewhere in a remote corner of the world in China, a virus will enter the human body and start a chain reaction which will threaten the stability of the world and set a pandemic. Come to think of this, these are microscopic, even tinier than a bacteria and logically should not stand a chance in their fight with more complex multicellular human beings. But it is wrong to equate the size with might. When you think of some of the worst epidemics/pandemics in history, the top names are undoubtedly Spanish flu, AIDS, SARS, Ebola etc. What is common between these are that they all are viral. Viruses, the acellular, nonliving thing if outside the host’s cells, are biologically the most successful inhabitants. So, what is it that makes these nanoscopic things so resilient and triumphant? To know the answer, let us first understand it’s structure.

We all have some idea about the cells, somewhat their structure too that we learnt back in school. The cells we humans have or most macro-organisms we see around or we know of, have a nucleus-the house of the genetic material, many other membranous and non-membranous organelles in the cytoplasm that coordinate with each other and all of these are enclosed in an outer envelope called a cell membrane. The bacterial cell is simpler as it has no nucleus but of course genetic material, no membranous organelles in the cytoplasm and all this is enclosed in the outer cell membrane. Plants, bacteria and fungi have cell walls additionally. The structure of a virus is even simpler and traditionalist than a bacterial cell. It has genetic material, mostly RNA (Ribonucleic acid), very few having DNA (Deoxyribonucleic acid) which is mostly single and rarely double-stranded, wrapped in a proteinaceous sheath. This sheath is called capsid and protects the most important molecule i.e. the genetic material which is the blueprint for formation of more similar miniscule types. Capsid is enclosed in the outer membranous coat called envelope. Envelope is mostly made up of lipid bilayer, the same chemical that makes cellular membranes of all the organisms. Envelope has some protruding spike like structures which are very useful in making attachment and then entry into the host cell. Structurally viruses are very rudimentary and conservative. The following image gives a fair idea about the structure and size of the mentioned cells. 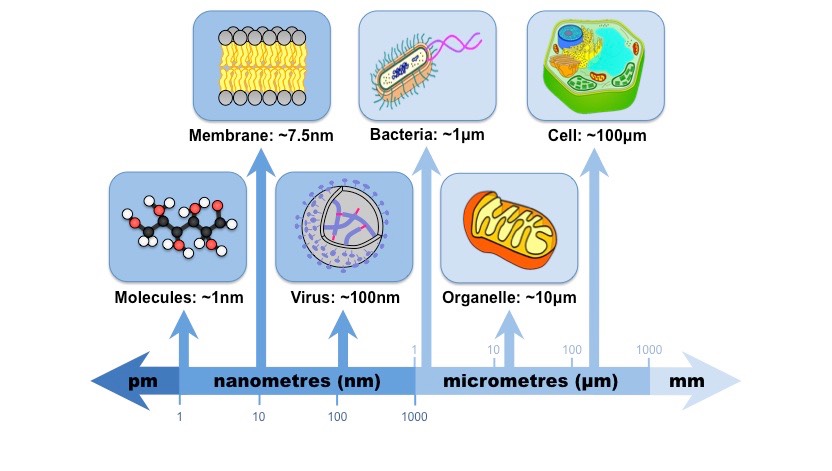 Whereas the cells have the inbuilt apparatus and mechanisms to form their copies and propagate the numbers on their own, viruses don’t. They don’t show growth and development, unlike the cellular forms. They just have the genetic material but no assisting equipments in their structure that converts the blueprint into more similar types. So how do the viruses multiply, how do they rapidly increase their numbers in the absence of inbuilt equipments?

Viruses are covetous. They enter the hosts through various portals of entry that may be oral, ocular, nasal or others, land on their cells, attach to them with spikes, dissolve the cell membrane and inject their capsid into the host cell’s interior. So the genetic material of virus is the only single molecule that is now inside the host cell. This lone, vigorous molecule is the most important commander to begin the army of millions and trillions of its type. It hijacks the host’s cellular machinery, instructs the cell to form the viral genes and proteins, gets assembled as a new unit, destroys the cell and moves out to infect and repeat the process in the other cells of the body. Someone smaller than everything else around with just a genetic material, close to nothing else in the uncomplicated structure, no integral machinery to reproduce, takes over its much larger host and makes it servient in no given time. It fools the host to reproduce its types to remain viable and spread further. They are the tiniest but undoubtedly the meanest of the lot. This absolutely opportunistic behavior makes a virus biologically successful.

Viral epidemics have been and still are comparatively difficult to curb than the ones caused by other infectious agents as bacteria, protozoa or fungi. Viral diseases are more life threatening. Why containing a viral epidemic is an arduous task and creating its vaccine is even more. It is comparably undemanding to come up with a vaccine for other epidemics but viral. Vaccines are weakened formulations of a pathogen to activate specific antibody production. The host’s immune response to a pathogen is release of related antibodies to fasten with and make it inoperative. The attack of the pathogen triggers the formation of larger number of similar antibodies to take care of the infection. The chemical structure of genetic material of a virus poses a big challenge in the vaccine creation. RNA being single stranded molecule with a ribose sugar is chemically highly unstable and so is more prone to mutations. The constantly changing structure is a big hindrance in vaccine production but gives an evolutionary advantage to the virus. The pathways and capacities for viral research are also more stringent, complex and big budgeted being highly pathogenic nature of viruses. By the time the complete genome is sequenced, solutions made keeping that genetic structure in mind, the virus has mutated rendering the vaccine response inactive! Rightly so viruses cause increased anxiety in one’s mind than other pathogens.

Something seemingly insignificant because of miniscule size, not evolved much structurally and functionally but makes its presence felt, causes a global havoc, has fulfilled its existence and role in nature. Indeed virus is the most successful inhabitant amongst miscellany of beings on earth.

Photography and the Hunt During the British Raj