Modern Indians are known to celebrate Halloween, but not many of them know its roots. Halloween marks the Western Christian feast evening of the All Hallows’ day- a day devoted in memory of Christian martyrs and Saints. Finding its roots as an ancient harvest festival of the Celtics (called Samhain), it is believed to have been Christianized to Halloween. Dawning the dead, trick or treating, and carving jack-o-lanterns, among others, have become signature to Halloween worldwide, including India.

Diwali, literally translating to row of lamps, is the festival of lights. In spiritual terms, it symbolises victory of good over evil, light over darkness, and knowledge over ignorance. Illuminating homes with diyas and fancy lights, lighting up fireworks and worshipping Goddess Lakshmi are some of the basic traditions that mark Diwali celebrations.

Diwali and Halloween have simple parallels like the good, evil and the balance between the two forces. Beyond that, Diwali joins hands with Halloween in being the only Hindu festival to be celebrated on a non-auspicious day. Diwali falls on the day when the sun is most debilitated, that is, in its weakest form. Additionally, the moon is in its weakest form as it is a no-moon night. These alignments are interpreted as the rising strength of the dark forces. The lighting of lamps and the prayers are to strengthen the sun and fight-off the evil forces. On that note, Halloween honours the faithfully departed in what is viewed as light hearted yet spooky fashion. Both are different forms of mass cultural remedies seeking to maintain a balance between good and evil.

For starters, should it even be that big of a concern that we are adopting a seemingly harmless festival? Not really. However, the convenient coincidence of its origins, and how it has been decoded by us will be somewhat revealing.

In a nation with the largest number of public holidays and the GDP hiking during this 'financially-festive' quarter of the year, Halloween has made itself home among the young elite of India. The post-liberalization bit of Hollywood seeping into Indian mainstream media, painted pictures of a land far, far away and added to our culture palette. India is diverse, sure, but it becomes even more so with cultures and lifestyle hybrids of the west. Participation in an ancient Celtic harvest festival soaks in the enthusiasm of our participation. Moreover, with our superpowers to Indianize, we have smoothly managed to reinvent Halloween in our own contexts.

What is actually interesting to note is that the festival is celebrated by the elite upper class cream of India. If it was truly a festival that had transcended borders to be accepted, why has it not been able to seep through? Is it a wild coincidence that the very same people who actually had resources to channel the influence (I mean Netflix), celebrate the festival. It lays testimony to the idea that yes, it is a case of our susceptibility to the west.

Poking at another argument. Halloween worldwide has seen its young participants look up to comic book characters as costume ideas. If Halloween had been an actual cultural exchange, the concept would have been borrowed, not the context. Ask yourself, have you ever seen a Suppandi or Chacha Chaudhary costume in one of those Halloween parties? We clear missed out on a fertile opportunity to reinvent the festival to just dump it as a lust for the west.

Before dipping into why Halloween celebration in India can yet again be established as a western lust, it is interesting to see where the exchange became possible. With the Age of Enlightenment, the divorce of religion from science, led to the remains of a spiritual threads that people hung on to. A worldview which came to value the self and self development. Theories came to be judged in terms of their sustainability under existential beliefs and spiritual progress. This shift is a possible explanation for the parallels between Halloween and Diwali, essentially those of good and evil. Extrapolating it to a modern India, it extends the spirituality over tradition shift to explain why Indians are helping themselves to Halloween. 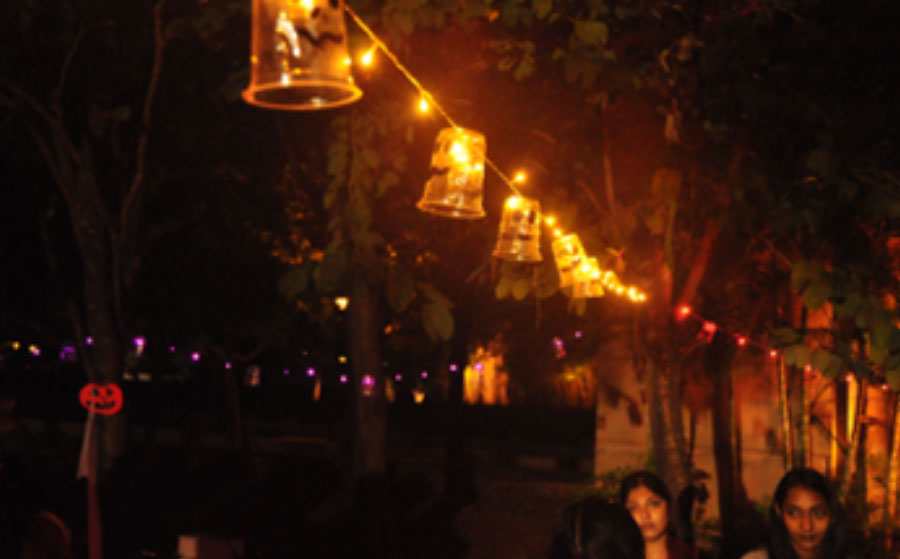 Some cite their loyalty towards the global festivals to explain why they celebrate Halloween despite no cultural links. The reason why the global festival argument is weak is perhaps because the Halloween-Diwali amalgamation is leaning more towards a uni-lateral flow than an actual two-way exchange. The limited cross cultural exchange in respect to Diwali has been through the actual physical transfer of Indians to foreign lands (given those immigrants celebrate Diwali). Step two entails the celebration of Diwali by Indian households in say, an American land. But, the exchange is capped at Diwali celebrations only managing to attract a likeminded Indian community.

Enter, a psychology study aiming to understand differences in thought among Western and Eastern communities. It was pointed out that Western thinking has been proven to be more individualistic when compared to Eastern thought, which was found to be more holistic. Among other traits like high value of personal choice and freedom, Westerners were found to value unchanging and fixed situations. This kind of social orientation, the fixed and unchanging bit, was found to spill into their fundamentals of reasoning in day to day lives. This is probably why it was preferable to go on without going out of the way to include Diwali in their calendars.

In an eye-tracking study by Richard Nisbett at the University of Michigan, the findings suggested that Americans focused more on the focus subject whereas the East Asian participants were more interested in working out the background or context of the image. Applying it to Diwali in America, the festival is ‘objectively’ viewed as belonging to Indians and that’s that. As simple an MCQ with ‘true’ and ‘false’ options. On the the hand, Halloween in India is seen with its context. Our innateness to perceive evil or imagine a victory over it, we are able to borrow from our own cultural history to lend context to Halloween. Existent enough to welcome Halloween in India. It is also admissible that Halloween’s design is fairly easy to adapt. The portability of the festival is a catalyst of sorts.

Talking real stuff, the strategic notions of e-commerce and advertising have tried to tap into this psyche. Attempting to extract profit from our inclination to westernize, the markets have begun to package and sell Halloween merchandise as global and trendy.

It is worth mentioning that at the end of the day, Halloween is another addition to the palette of festivals we as Indians like to celebrate. Each of these contribute to a part of our identity which hopefully takes a graceful turn towards fluidity and larger acceptance. In other words, a true cross-cultural exchange.

From FLAME to Cannes, alum Avinash Vasu can and will represent filmmaking in India on global stage

COVID-19 Pandemic and Role of the Rural Employment Guarantee Scheme

Funding - an input or an output?

On workation during a pandemic