The narrative strategy of this translated volume of stories is simple, yet laden with meaning.

Unni R. is a contemporary Malayalam writer who has impressed readers with his unique literary imagination. His storytelling style makes his work a class apart.

He is well known for weaving magic with his words, playing with language, including a finer detailing, and the use of atypical metaphors and characters, often regarded as virile. One Hell of a Lover (2019), translated by J. Devika, is a collection of Unni’s selected short stories, widely read and discussed among Malayalam literary enthusiasts.

Set against the backdrop of the author’s village, Kudamaloor, in the district of Kottayam in Kerala, these stories are about ordinary people in extraordinary situations.

If people and their stories make a place, then the Kudamaloor he portrays in his stories is way different from the otherwise outwardly savarna Kudamaloor, once the headquarters of the erstwhile Brahmin Chembakassery kings and now famous for its many temples and renowned maestros of Kathakali and other temple art forms. It is from this mainstream savarna place that Unni discovered his ‘underclass’ characters and their stories, much to our surprise.

However, Unni’s stories are more than a portrayal of provocative human relationships or the ugly shell of toxic masculinity; his literary paradoxes expose many socio-political truths.

Most of the stories are commentaries on fractured and fragmented Kerala society and its patriarchal existence. His fiction explores the power dynamics of religion and caste, conversations around gender relations, ecology as well as freedom. In doing so, the writer brings forth vivid everyday realities of common people. 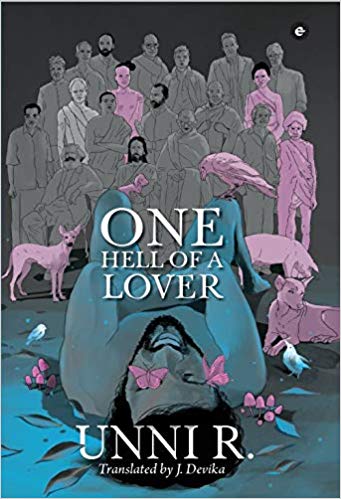 One such story, Satanic Verses, is a searing testament of the current times in which writers and intellectuals are targeted and harassed. In the story, police interrogate Kunhikkannu, an illiterate bookseller, for keeping a copy of a prohibited book in his shop. Unable to answer the questions, he wonders about the “book that could not be sold or read.” This reminds one of Perumal Murugan, S. Hareesh, Salman Rushdie, Taslima Nasreen, and several others who had to go through a similar ordeal in the recent past. It is interesting to note that Unni himself has been targeted on several occasions for his bold political viewpoints. Tellingly, he has dedicated this collection of short stories to his “mother, wife, and daughter,” for standing with him “at a time when writers are killed” for their creative literary expressions.

Unni takes an audacious stand on communal and targeted violence in Badusha the Walker. Seventy-year-old Badusha is picked up by the police for his name when he goes for a walk on the moonlit beach. Police brutally torture him, suspecting him to be a terrorist with “special training” and confiscate from him nothing but “a key, a sea-shell, and a leaf.” In a time like the present, when systemic oppression, targeted attacks, and hate crimes against religious minorities are on the rise, we can substitute Badusha with a Pehlu Khan, a Umar Khalid, or so to say, many others in the ‘new’ India of violent ethno-nationalism.

Calling for Prayer is the story of Raziya, who wishes to give out the call for azaan. This sparked a great deal of discussion as well as controversies in Kerala on Muslim women’s right to participate in religious rituals. The story is somewhat prophetic as its publication in 2018 in a well-known Malayalam weekly was followed by the news about a 34-year-old Muslim woman, Jamida, from Wandoor in Malappuram district, leading the Friday prayerfor the first time in Kerala and perhaps even India. The state has witnessed discourse on women’s entry into the Sabarimala temple as well.

The story of two salesgirls, Radha and Sumathy, in The Grievance, can tell us a lot about the gender violence women have to face on a daily basis, affecting their well-being and performance at work. Unni also reminds the readers that there’s more to gender than the binary of man and woman. One Hell of a Lover is often discussed for its perverted erotic fantasies and tint of magical realism. It has a surprise for readers hidden at the very end. In a society where gender or sexual-nonconforming people are constantly ostracised, Travelling Together and That Thing address the invisible lives of same-sex lovers, subtly but with sensitivity. In Travelling Together, Radhamani and Sumathy, after entering into a suicide pact, decide to “get a hug-picture” and realise that they cannot smile in front of the camera. They leave the studio, saying, “We will come back when we can smile”.

Fiction plays a crucial role in making the underlying social structures and their inter-sectionalities apparent to the readers. Religion is critically looked at, and this collection asserts that caste and its many manifestations are still a reality in the so-called progressive Kerala society. These short stories emphasise the struggles the economically and socially marginalised sections have to undergo. In One Hell of a Lover, a pertinent subtext on religion and caste presents itself when sculptor Parameswaran is entrusted to “make a life-size statue of Sree Narayana Guru,” and has an encounter with Guru himself one night. Guru asks him, “Why do I need such a shrine and a statue now?” which is a reference to the social history of Kerala’s caste reform movements initiated by Narayana Guru and the like. Guru who once denounced his caste, has unfortunately, now become the godly icon of Kerala’s caste politics. Guru had also said that instead of temples, educational institutions are needed. However, one will find Narayana Guru temples in present-day Kerala. This reminds us that the truth itself is under attack everywhere.

Similarly, Poykayil Appachan and several other Dalit activists feature in He Who Went Alone, which is one of my personal favourites in this collection. There is also a feminine Jesus in the story. We live in such a time that this uncommon depiction of Jesus, and the restrained satire in the narrative can be seen as blasphemous by regressive sections. In that respect, Holiday Fun, later made into a movie Ozhivudivasathe Kali, is a gripping tale of caste, class, colour and misogyny in our society that has an unexpected and horrifying end. Caste and class are major undercurrents in The Spectre as well. Thus the cultural specificity in these stories is complemented by the universality of their themes.

Writing as well as translating is a politics, and both writer and translator end up taking a political stand in the process.

The narrative strategy of this collection is simple yet intricate. Undoubtedly, J. Devika has captured the multiple layers of the writer’s Malayalam and thus opened up the literary world of Unni R. to non-Malayali readers. Many readings can be possible as his stories are multi-layered, and his characters have many interesting shades. I believe that it is not the responsibility of the writer to reveal what is implied, but it is up to the readers to extract the hidden meanings out of stories.

One Hell of a Lover is indeed one hell of a reading, as well.