www.theindiaforum.in | August 12, 2021
The Indian census' classificatory practices obscures the full extent of language diversity in the country. Including what the census calls "mother tongues" presents a fuller picture.

At every kos distance, the water changes; at every four kos, the tongue

India is one of the most linguistically diverse countries, ranking 4th in terms of the number of language spoken, according to the Ethnologue Language Catalogue of the world. Yet, enumerating its languages has been contentious, given the implications of legitimising and delegitimising linguistic identities. The Indian Census’ way of classifying of languages occludes this diversity. We present here a truer picture by including in our calculation of diversity what the census calls “mother tongues”.

Is it a language? Is it a mother tongue?

Counting and classifying the languages and dialects in India has been challenging for both linguists and state agencies from colonial times to the present. In many North Indian states, for instance, people distinguish between Bhasha (language) and Boli (spoken language). They might Hindi as their language in official documents, while their language may actually be, say, Bhojpuri. This is roughly in line with granthika, the literary variety, and vyavaharika, the colloquial variety.

Forms which vary regionally or are used exclusively by lower classes or castes are relegated to the status of dialects.

Disagreements about the classification of languages and dialects leads to these divergent estimates of languages in India. Linguists generally distinguish between the two on the basis of mutual comprehension. But often, the distinction between language and dialect is more political than a linguistic question. The power and prestige of certain selected forms, widely used across large geographic regions, often acquire the status of a language, whereas forms which vary regionally or are used exclusively by lower classes or castes are relegated to the status of dialects. If mutual intelligibility is the criteria, Hindi, Urdu, and Punjabi should have been the same language, whereas Rajasthani and Kumauni should be different.

The Census’ process of enumeration does not “represent the full linguistic diversity of India; in fact, it minimises it.”

Collectively, these “other languages” are spoken by 1.87 million people, and “other mother tongues” by 18.6 million people (Census of India 2018). Under the “Hindi” language alone, there are 16.7 million speakers who speak ‘other mother tongues.’ The population of some of the ‘minoritised’ languages, such as Bhili (with 10.4 million speakers) and Gondi (with 2.98 million speakers, based on Census 2011 figures), exceeds that of many small countries, including the country with the most languages spoken— Papua New Guinea. The mother tongues under Hindi Bhojpuri (50.6 million speakers), Rajasthani (25.8 million), and Chhattisgarhi (16.2 million) have speakers comparable to Spanish speakers in Spain, Polish in Poland, Dutch in the Netherlands, and yet, they do not have the status of ‘language’ according to the Indian Census.

As is evident from these stark discrepancies, the Census’ process of enumeration does not “represent the full linguistic diversity of India; in fact, it minimises it” (Kidwai 2019).

Despite all its limitations in classification, undercounting, and exclusion, the census classification still shows enormous linguistic diversity in India and within Indian states. The languages broadly belong to the following families: Indo-European (Indo-Aryan, Germanic (English), Iranian (Persian, Afghani)), Dravidian, Austro-Asiatic, and Tibeto-Burmese. These, along with Semito-Hamitic (Arabic), constitute the main languages in India. The most diverse language group is the Tibeto-Burmese group with 66 languages. The most spoken languages belong to the Indo-Aryan branch with 78% of the population, Dravidian 20%, Austro-Asiatic languages 1.1%, and Tibeto-Burmese just 1%, spoken in North-Eastern India (see Table 1). 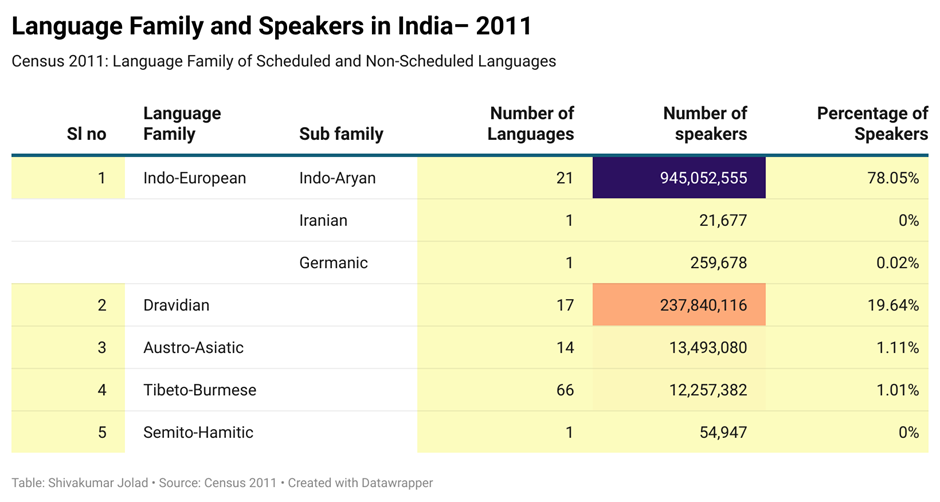 For this, we use the Greenberg’s Diversity Index, a validated instrument that measures linguistic diversity. The Greenberg’s Linguistic Diversity Index (LDI) is a number between 0 and 1. It is 0 when every person in the region under consideration speaks the same language and reaches the maximum value (close to 1) when every language has an equal number of speakers. The Linguistic Diversity of India (LDI): Language and Mother Tongue plot for India and its states is shown in Figure 1. 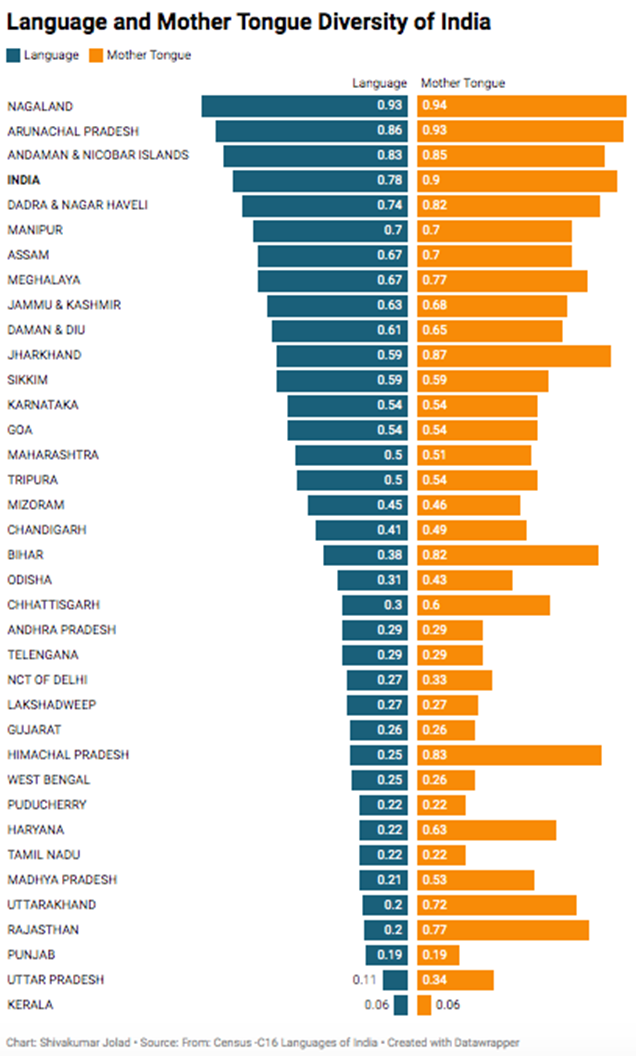 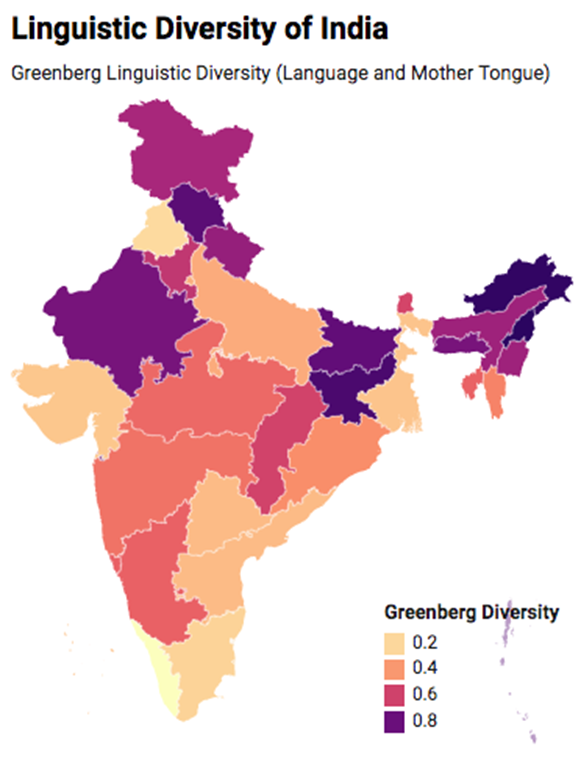 Figure 2:Map of Linguistic Diversity of India. Based on Greenberg’s Index

The LDI of India, considering the restrictive 121 language classification of Census 2011, is 0.78. If we include mother tongues, diversity rises to 0.9. The latter is closer to the diversity index of 0.93 calculated by UNESCO using Ethnologue’s catalogue of 425 languages (UNESCO 2009), which includes more languages — for instance, many of the 197 endangered languages spoken by less than 10,000 people.

The most linguistically diverse states in India are Nagaland and Arunachal Pradesh, followed by tribal areas and islands like Andaman and Nicobar. Small states with distinct ethnic and tribal groups show greater linguistic diversity than large, densely populated states like Uttar Pradesh and Kerala, where there is homogenisation induced by diffusion of people and culture over time. In Kerala, 97% of the population speaks one language: Malayalam. 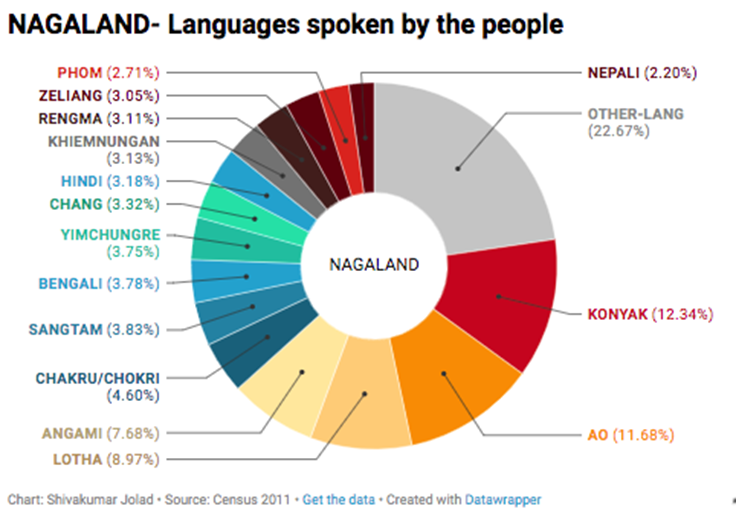 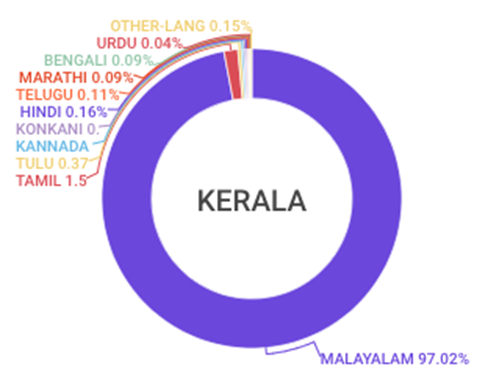 Figure 3: Languages spoken in the most diverse (Nagaland) and the least diverse state (Kerala) of India

Homogenisation of the dialects of Hindi

The gap between LDI-language and LDI-mother tongues is particularly stark for states in the ‘Hindi’ belt of north, central, and western India, which have several mother tongues that have been grouped under the rubric of ‘Hindi’. The LDI in these states is low primarily because 54 languages are treated as mother tongues under Hindi. Of the top 10 states ranked according to highest mother tongue diversity, nine have Hindi as the official state language.

Take Uttar Pradesh, the largest state of India, which has 94% of its population speaking Hindi as the dominant language, followed by Urdu at 5.4%. It has a low LDI of 0.11. But the state has a significant proportion of speakers of mother tongues classed under Hindi: Bhojpuri (10.8%), Awadhi (1.9%), Bundeli/Bundelkhandi (0.65%), and Brajbhasha (0.36%), among others. If all these mother tongues are included, UP’s LDI rises by three times to 0.34. 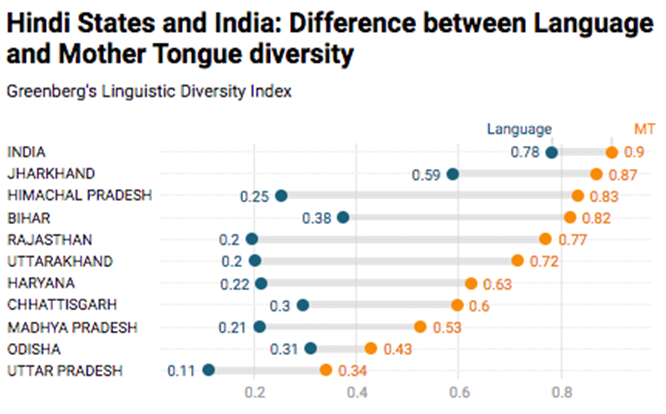 In Himachal Pradesh, Hindi as a ‘language’ has 85.89% of the population as speakers. But Hindi as a ‘mother tongue’ (15.68%) comes third after Pahari (31.9%) and Kangri (16.25%). Both the latter languages are clubbed under Hindi, along with Mandeali, Kulvi, Bharmouri/Gaddi, Chambeali/Chameli, and Sirmauri. Himachal’s LDI-mother tongue (0.83) is more than three times larger than LDI-language (0.25).

Such homogenisation of mother tongues under dominant languages diminishes the linguistic rights of their speakers. In the Hindi belt states, the administrative language and medium of instruction in schools remain Hindi, undermining those who speak languages like Bhojpuri, Pahari, Maithili, Rajasthani, and Marwari.

Many of India’s excluded languages and mother tongues fall under UNESCO’s endangered languages list , and are mostly spoken by people in the North East and in the tribal states of India. For example, Aka/Hruso and Koro languages in Arunachal Pradesh, Asur in Chota Nagpur belt, Nahali in Madhya Pradesh fall under the ‘definitely endangered’ group, Atong in Meghalaya, and Geta in Odisha fall under the ‘severely endangered’ languages. The excluded ‘other’ minority and foreign languages spoken within India include Portuguese, French, and German.

Linguistic reorganisation brought most of the scheduled languages “home” under a state umbrella.

With the exceptions of some states adopting non-scheduled languages as their official language, like Kokborok in Tripura and Mizo in Mizoram, linguistic reorganisation brought most of the scheduled languages “home” under a state umbrella (Pandey 1997, 81). Although the SRC sought to secure political and economic justice to linguistic groups, the language so secured was the dominant language at the state-level and not the diverse set of languages spoken within the state. States continue to promote their politically dominant languages in political and administrative affairs, largely ignoring linguistic minorities.

Inclusion under the Eighth Schedule, which obligates the government to use and promote the language, has largely occurred through political considerations and lobbying. In 1950, there were 14 languages under the schedule. This has now expanded to 22 through successive constitutional amendments. The 21st amendment of 1967 added Sindhi; the 71st Amendment of 1992 added Nepali, Manipuri, and Konkani; and the 92nd constitutional amendment of 2004 added Maithili, Dogri, Santali, and Bodo. India’s Scheduled Languages are mostly from the two dominant language families. Only Sanatali from the Austro-Asiatic family and Bodo and Manipuri (Maitei) from the Tibeto-Burmese family are on the list.

A dendrogram of Scheduled Languages and Mother Tongues, scaled to the population (logarithmic scale) is shown below (see Figure 5). 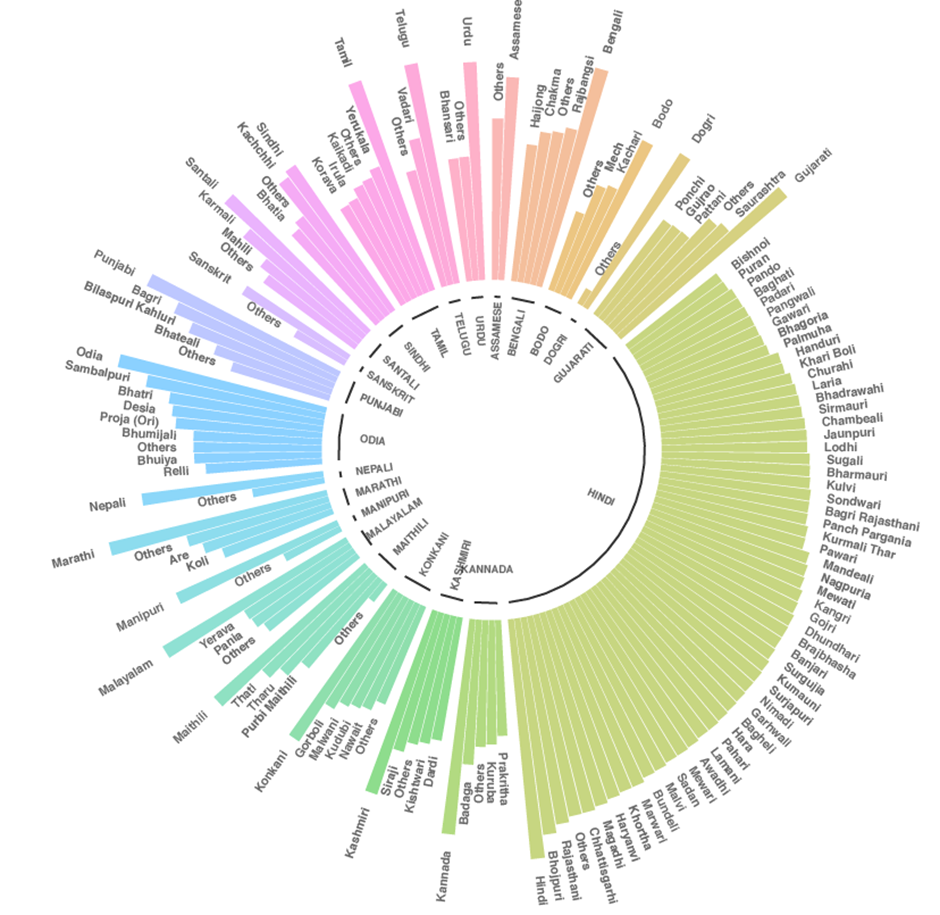 Figure 5: Scheduled Languages and their Associated Mother Tongues in India, based on Census 2011 Classification (The height of the bar represents the number of speakers on a logarithmic scale). Data Source: Census 2011, C-16 Series.

There is a demand for 38 languages to be included in the 8th schedule. But there is no “right to be scheduled” based on sheer numbers of speakers, even when the 2011 Census shows that, 10 'non-scheduled languages' have more than one million native speakers, and 31 have more than 100,000 speakers. In all, census 2011 lists 99 non-Scheduled languages (which includes English) and 147 mother tongues spoken by more than 10,000 people. The largest of these are Bhili/Bhilodi with 10.4 million native speakers, Gondi (3 million), Kurukh (2 million), and Khandeshi with 1.86 million speakers (see Figure 6), exceeding the population of certain European countries. Yet Sanskrit is in the official schedule even though only 24,821 people claim it as their language. 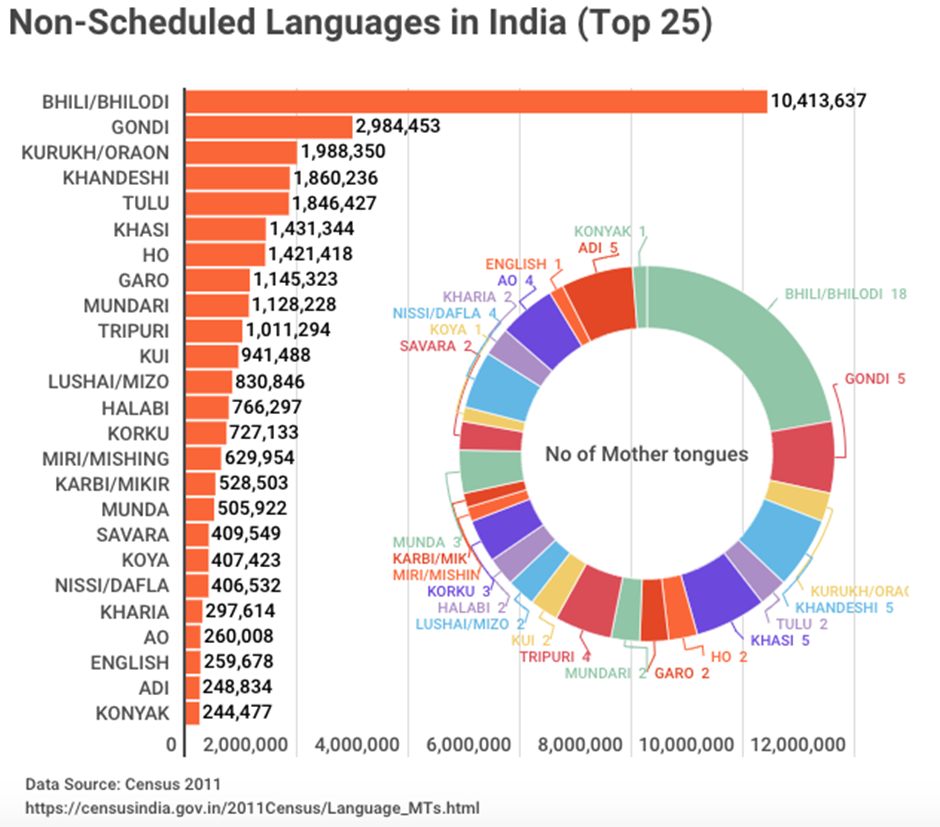 According to Thomas Benedikter, “Linguistic rights need official recognition, need instruments, infrastructures and funds of application, need a secure and clear legal framework, need validation and support from the State, which exercises sovereignty and public power”. The ‘minoritised’ non-scheduled languages are underrepresented in public education, media, and the economy and business, violating the linguistic rights of its speakers.

Despite the constitutional directive of Article 350A for states to provide adequate facilities for instruction in the mother tongue at the primary stage, the languages of linguistic minorities continue to be underrepresented as media of instruction in schools. An analysis of DISE (District Information System of Education, 2015-16) reveals that only 28 languages are used as the main media of instruction in schools throughout the nation. This poses challenges for children who are unfamiliar with the language used in their schools, especially during their foundational learning years.

The current ruling party strongly advocates the notion of 'One Nation, One Language', with Hindi to be used across India, administrative and otherwise, thus promoting monolingualism, rather than valuing multilingualism and multilingual practice. The Census classification and grouping of languages and mother tongues through ‘rationalisation’ does not acknowledge the languages of millions of people. The ongoing pandemic has delayed the decennial Census of India house-listing, in all likelihood pushing the Census 2021 enumeration to 2022. This has provided extra leg space to mobilise reforms. We advocate reforms to the Census enumeration and classification of languages process to improve transparency, make it inclusive of all languages, and reflect the true linguistic diversity of India.

Benedikter, Thomas. 2013. Minority Languages in India: An appraisal of the linguistic rights of minorities in India. Bolzano: European Academy of Bolzano/Bozen (EURAC), Institute for Minority Rights.

Kidwai, Ayesha. 2019. “The People’s Linguistic Survey of India Volumes: Neither Linguistics, Nor a Successor to Grierson’s LSI, but still a Point of Reference.” Social Change 49, no 1: 154–159.